Fourth International Yoga Day, organized by Consulate General of India in Chicago, attracted thousands of Indian-Americans and people belonging to other Nationalities

Consulate General of India in Chicago, in collaboration with the City of Chicago  and Delhi Committee of Chicago Sister Cities International rolled out the fourth edition of International Yoga Day, on June 16, 2018 at Millennium Park, Downtown Chicago. The high-profile event was inaugurated by lighting of the lamp and singing of the National Anthems of Republic of India and United States of America. The purpose of the event was to create a broad-based awareness about the benefits of yoga for all sections of society, irrespective of their age group, and also to introduce the ancient mind-body practice to a generation of technology-loving kids and to reintroduce it to an older generation of high-strung adults. It was one of the mega events in Chicago in which about 100 community organizations and over 1000 Indian Americans and people belonging to other nationalities participated, along with their family and friends.

The event started at 10.45 hrs. with the demonstration of breathing techniques by Sister Tina from Brahma Kumaris of Chicago and a dance item by the students of Soorya Dance School. After this, the event shifted to its main official opening ceremony which included lighting of the lamp which was followed by demonstration of Common Yoga Protocol and concluded with the recitation of  Shanti Mantras.

Ms. Neeta Bhushan, Consul General of India in Chicago extended warm welcome and greetings to everyone present on the occasion. She said that yoga was a great way to connect to oneself and achieve a healthy balance between the mind and body. She also mentioned that Yoga helps people in maintaining balance among their thoughts, emotions, and feelings, and thereby improving their effectiveness, efficiency, and productivity.

The Consul General expressed her gratitude to the office of the Mayor of Chicago for partnership with the Consulate and for allocating Millennium Park for the event.

Mr. D.B. Bhati, Consul & Head of Chancery anchored the event and delivered vote of thanks. 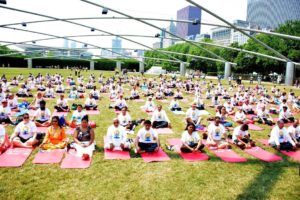